Joannes Bruchalsky, born April 12, 1864 and baptized the same day, son of the legitimate marriage of labourer Joannes Bruchalski and Maria, daughter of Grigorii Baran and Maria Babiak. Delivered by midwife Anna Kajdin. Godparents/Witnesses to the baptism were Onuphries Sulatysky and Irene and Joannes Kowtun, labourer.

Paulius Koszlak, born November 14, 1851 and baptized the same day. Delivered by midwife Helena Grbynik. Son of the legitimate marriage of Georgius Koszlak and Parasceva, the daughter of Danielis Drepko and Marina Duda. Godparents/witnesses to the baptism were Nicolaus Jakubowsky and Elisabetha Halka.

Daria Bruchalski, born March 29, 1858  and baptized the next day, daughter of the
legitimate marriage of Joannes Bruchalsky and Maria, daughter of Gregorii Baran and Maria Babiak, rural folk from Novosilka. Delivered by midwife Maria Patamar.
Godparents/witnesses to the baptism were Joannes Lahoda and Anna and Elias Chawawko, rural folk from Novosilka.

Great news for anyone researching Ukrainian genealogy!
Metrical records have been digitized and are available everywhere for browsing online at FamilySearch.org. (Prior to now, this was possible only from computers within FamilySearch Centres).
I’ve begun browsing through for siblings of my Ukrainian 3x great grandparents Prokop Koszlak, Krystyna Fink, Dmytro Bruchanski and Nastia Rozdobudko. The records are detailed enough to mention parents, mothers maiden names, grandparents, and sometimes even grandmother’s maiden names!
Beautiful!

Magdalena Koszlak, born August 1, 1852 and baptized the same day. Delivered by midwife Maria Patamar. Daughter of the legitimate marriage of labourer Georgius Koszlak and Parasceva, the daughter of Danielis Drepko and Maria Duda. Godparents/witnesses to the baptism were Condratus Sulatyski, farmers Elisabetha and Michaelis Jakubowsky. 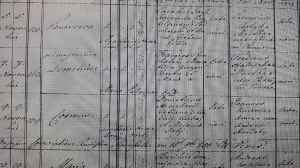 This Dmytro is very likely my 3x great grandfather. I believe he is the father of my ancestor Anna Bruchanska, despite the slight spelling difference in the surname. I did not find any Bruchanski’s in Novosilka’s church books, only Bruchalskis, and spelling errors upon immigration are more often the case than not with Ukrainians coming to Canada in the early 1900’s.

That being said, Bruchanski and Bruchalski are a pretty different phonetically, which is why I will not say that I am 100% sure at this time!

I finally made it to a Family History centre to do some research on my Ukrainian family, and was rewarded with some of the first progress I’ve made on that side in years. So far I had only been able to locate Canadian records for my furthest back Ukrainian ancestors – Danylo Koszlak and Anna Bruchanski. Their Manitoban marriage record had provided a brief glimpse at their parents – recorded as couples Prokop Koszlak and wife Krystina Fink, and Dmytro Bruchanski and wife Nastia Rozdobudko. Since Danylo and Anna were born circa 1890, I had assumed their parents would have been born around 1860 in Novosilka, Ternopil oblast.

Normally I would have tried to start with Danylo and Anna’s baptismal records in Ukraine to verify their parentage, then located their parent’s marriage records. But the metrical (church) books for Novosilka are only available from 1864 and back in time, so my only hope was to scan through the baptisms, hoping for Prokops, Krystinas, Dmytros and Nastias of the right age and surname to be my ancestors. Luckily, Novosilka was not a huge place.

I believe I found my 3x great grandfather Prokop Koszlak’s baptismal record, a little further back than I’d expected, though It makes sense since Danylo had older siblings. Here it is; his baptism from the Greek Catholic church in Novosilka circa 1848, written in Latin: 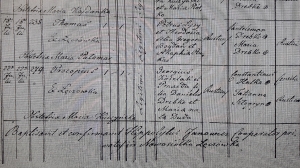 Born on the 22nd of July (delivered by Maria Kuczynska) and baptized (by Hippolytus Janowicz) on the 22nd of July to the family living at house #279 in Leczowka (Novosilka). Prokop, son of Georgius Koszlak and his wife Praxeda nee Drebko, daughter of Danielis Drebko and his wife Maria nee Duda. Godparents are Constantinus Halka and Tatianna Sztogryn. 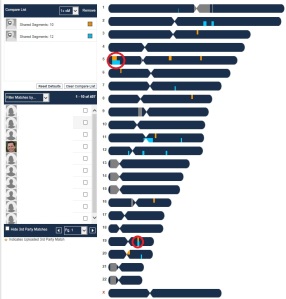 Something I am noticing amongst my father’s DNA matches is a recurring coincidence: adoptees. Amazing, really, because even in his more immediate biological family, adoption is a major theme.

I discovered, amongst the French Canadian cousin matches, a handful of matches with Eastern European ancestry (two of whom with adoption stories). Four of them caught my eye; two in particular share the same common segment of DNA with my dad and are within estimated 2nd-5th cousin range. All 4 recount ancestry from western Ukraine. This is good – it confirms that I’m on the right track again and that my what we know to be my father’s parentage is indeed his biological parentage. It also speaks to the fact that the Ukrainians in my tree likely were truly ethnic Ukrainians, not just people passing through, and had been in the same area for centuries.

The next step is exploring these matches’ family trees; with such a close relation as 2nd-5th cousin, I should be able to sniff out some leads. The family tree I know of so far goes back to my father’s great grandparents and their parents.

The results of my father’s DNA test are in! They were earlier than expected too (Thanks, FamilyTreeDNA!)

The good and bad news is – they’re exactly what I expected! Heaps upon heaps of French Canadian matches, most of whom are related through multiple channels (related seven ways to Sunday, if you will). I am going to comb through his matches and try to pick out Eastern European or Italian ones, since those are the two lines I am most interested in because I know the least about.

His ethnic admixture can be summed up in one phrase – “Pan-European”. North, Central, Eastern, Western, Southern European, with a pinch of Ashkenazi to round it out. What can I glean from this? Well, likely his biological parents; who are half French Canadian, half Ukrainian and half French Canadian, half Italian respectively; are definitely confirmed to be his biological parents – the matches and admixture certainly fit the bill. For someone who can be said to be 50% French, 25% Italian and 25% Ukrainian, you can see that deeper than that, his French people likely descend from Celtic tribes – you see this in the British Isles-y, Iberian Peninsula-y bit. His Venetian Italians account for the southern European/Mediterranean/possibly some of central European. And his Ukrainians were likely a mix of ethnic Ruthenians(surnames Koszlak and Rozdobudko), some Ashkenazi Jews(possibly the surname Fink) and a more Baltic, northern Polish link (Bruchanski?).

All in all, despite no hidden surprises, at least his DNA is a hint that I am on the right track with my paper trail, and no major non-paternal events (read: illegitimate kids) seem to be popping up.

Without further ado, here’s some admixture interpretations, courtesy of FamilyTreeDNA, GEDMatch, and DNA.Land: 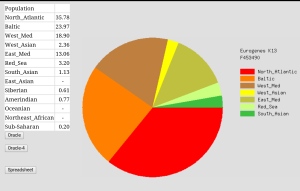 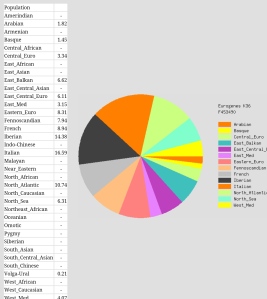 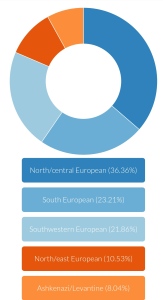 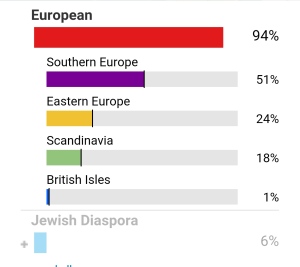 Well, I’m finally posting after receiving my DNA test results. The results are in…. and no big surprises. So far as ethnicity and admixture predictions, it seems safe to use the term “Pan-European”. I’m a mix of Baltic (mostly from my entirely Baltic mother), Mediterranean, Central European, East European and West European. As broad as that is, it seems to fit in with my known ancestry – 8 great grandparents with 4 being Latvian, 2 being French Canadian, 1 Italian and 1 Ukrainian.

My problem with this result is that it doesn’t really help define anything, which I was afraid of! It’s been suggested to me that some clues to be gleaned from this could be that my Ukrainians possibly had Polish and German backgrounds, as my Baltic and West European results were comparatively high compared to Eastern European.

Another fear of mine was that due to the endogamy in the French Canadian population (Endogamy is the fancy word for cousin marriage), that any DNA matches of French background would be related to me through so many different lines that even close matches would actually be much further back than they appeared. Well, I was right. Most of my matches appear to be French, and indeed related many ways. I received disappointingly few Italian sounding matches – I was hoping that with foundling orphan Arnaldo Morianti, DNA might give me some clues as to his biological parenthood.

Still, there were a few interesting hints hidden in my DNA. Trace amounts of Sub-Saharan African show up using certain admixture tools – this can happen amongst Italians – along with just enough, a tiny sliver of Native American identified DNA – believable, when you know French Canadian history.

I ended up asking my father to test, to get more information. Who knows what could be hidden in the 50% of his DNA that I did NOT receive from him! More ethnicity detail and Italian cousins, I’m hoping! His results are due soon.

In the meantime… here’s some interpretations of my admixture! 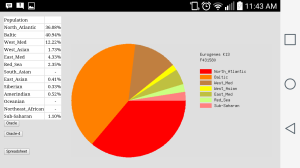 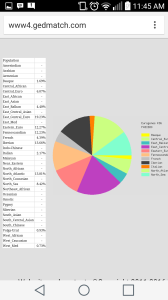 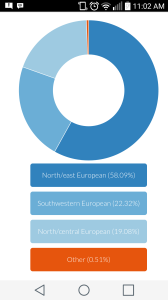 Finding My Ancestors
Create a free website or blog at WordPress.com.