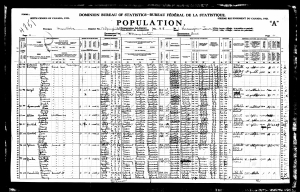 The sixth census of Canada was taken in June of 1921. Here I found my great great grandfather Danylo Koszlak and his family. Just five years earlier on the 1916 Census of Manitoba, Saskatchewan and Alberta they were living on a farm in the RM of Brokenhead. But by 1921 they had moved to nearby Beausejour town. Here’s the details of the census record:

Koslak,
Dan, Annie, Mike, Pete and Mary
Dan was the head of the house, Annie his wife, Mike and Pete were sons and Mary a daughter
Dan was 33, Annie 30, Mike 7, Pete 5, Mary 2
Dan and Annie were born in Austria, the children in Manitoba
All identified as Austrian in ethnicity
Dan came to Canada in 1910, Annie in 1912
Dan and Annie had not become Canadian citizens yet
No one could read or write
All could speak Polish
All were of Roman Catholic faith
Dan worked as a carpenter on odd jobs, no one else worked