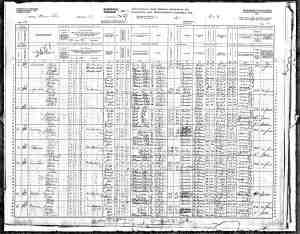 In the late 19th century and early 20th century, Canada’s prairie provinces saw a large population boom. In addition to taking the census every 10 years(1851, 1861, 1871, etc) as was done for all of Canada at the time, it was decided to take an extra census every 5 years for Manitoba, Saskatchewan and Alberta (1906, 1916, etc until 1956 when all of Canada was polled every 5 years) to help keep track of the blooming population.

This is the 1916 entry for the Koszlaks:

Family #97 in Brokenhead Regional Municipality (Township 14, Range 8, Meridian E)
Family head: Daniel Koslak(26 years), wife: Any Koslak(24 years), son: Mich Koslak(2 years) and son: Peter Koslak(10 months)
Birthplaces: Daniel and Any born in Austrian Galicia, Michael and Peter born in Manitoba
Family’s religion: Greek Catholic
Daniel and Any came to Canada in 1912. Citizenship: Austrian for Daniel and Any, Canadian for Michael and Peter
Family’s ethnicity: Ruthenian
Can speak English: only Daniel
Can speak French: none
Family’s mother tongue: Ruthenian
Can read and write: just Daniel
Occupations: Daniel was a farmer, none for the rest
Where was he employed: at a farm

So there’s not a whole lot of new information here on this census except for but approximate birth years for Anna(1891), Michael(1914) and Patrick(1916). Nevertheless, the more reinforcing documentation you can find, the better!